When you book with an account, you will be able to track your payment status, track the confirmation and you can also rate the tour after you finished the tour.
Sign Up
843

Flat rate for unlimited use - date & zone specific
Availability : Year Round
In stock!

OUR ADVICE:
Never go to London without one!
We will NOT be undersold on these items.

We are official agents for Transport for London.
We carry the physical cards in stock. No need to exchange vouchers.
Includes tube map.

You can pick up the Oyster or the Travel Cards from our office, or we will send by regular mail at no extra charge.
Express Post delivery has a $19.00 handling fee for Ontario & Quebec, $23.00 for all other provinces and $36.00 (CAD) to the U.S.A.

Unlimited travel on London’s underground, buses and local trains in the specified zones.

Cards are date specific and stamped. The 7 day card is for 7 consecutive days. 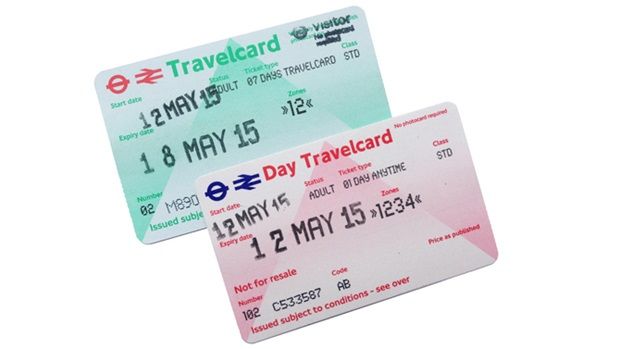 Which Card is for you?

London Transport has introduced the “Oyster” card as their local Transport Pass, and it is advertised as being less than other local passes or individual tickets. For example, instead of a 6.00GBP fare from Heathrow to central London the Oyster card would be charged 5.10GBP, with a maximum of 12.50GBP being charged per day for travel in Zones 1 -6 or 6.80GBP per day within Zones 1 and 2.  The visitor version is sold in various units plus an initial 5.00GBP initial fee, is the same for all ages, and has to be renewed as you go at various underground stations. The main advantage is that it does not have to be used on consecutive days and can even be kept for later trips to London. A disadvantage is keeping track of how much value is left and the need to keep renewing it, which can be done at most underground stations.

The Oyster is primarily for Londoners and those visiting on non-consecutive days. We strongly feel that, for the large majority of clients visiting London, the best bet is still the London Visitor Travel card (flat rate for unlimited use in specified zones PLUS includes buses from zones 1-6).

If you will be on and off the underground, buses and local trains a lot, then the best value, and the most convenient, is the London Visitor Travel Card, especially the 7 day versions, which we would recommend for a 4 day stay or more.

Visitor Travel Cards are valid for travel at any time, including peak periods and no picture I.D. is required. If you need a 4, 5 or 6 day card the best value is the 7-day card. Children under 5 travel free on all services. Children under 11 travel free, after 9.30am, on the underground system and the DLR (Dockland Light Railway) when accompanied by an adult with a valid Travel Card.

The All Zone card allows travel by bus, underground or rail, to the outer limits of Greater London, including Hampton Court, Heathrow (not Gatwick) and Kew Gardens. The Central Zone covers all the main sites in central London from Notting Hill in the west to Canary Wharf/Greenwich in the east and Hampstead in the north to Brixton in the south, plus ALL busses zones 1 – 6. If you are travelling outside of London, for example to Windsor or Oxford, showing the Travel Card at the ticket office will give you a subsidised rate. The cards are for consecutive days and are date stamped so you need to advise us of the exact dates you require. Once stamped the cards are non-refundable and non-changeable.

When you book with an account, you will be able to track your payment status, track the confirmation and you can also rate the tour after you finished the tour.
Sign Up

Or Continue As Guest